About the 11th Airborne Division Association

The 11th Airborne Division Association was the dream of members of the Division who wanted to be sure the unit did not totally cease to exist by starting an Association. The names of all of the members are unknown as many of the records and financial records have been destroyed or lost over the years, but the association has a long and strong history of providing a gathering place for Angels and those interested in our unit’s proud legacy.

Two of the original members were Richard Hoyt (511th Signals Company, 1942-1945) and Ted Lewis (HQS-675th PFAB, 1943-1946). These two Angels met in San Antonio, Tx in 1968 and discussed what and how to get the association started. It was decided to contact everyone they knew to pass the information. Considering that this was done in the pre-internet days, the details of how they did this must have been an outstanding achievement.

The first copy of The Voice of the Angels was published in late 1968 with the editor being Richard Hart and later Jerry Davis (H-511, 1943-1945). Since that initial startup, there have been, as of this writing, 215 issues mailed to the members of the Association. In that time, not a single quarter mailing has been missed. 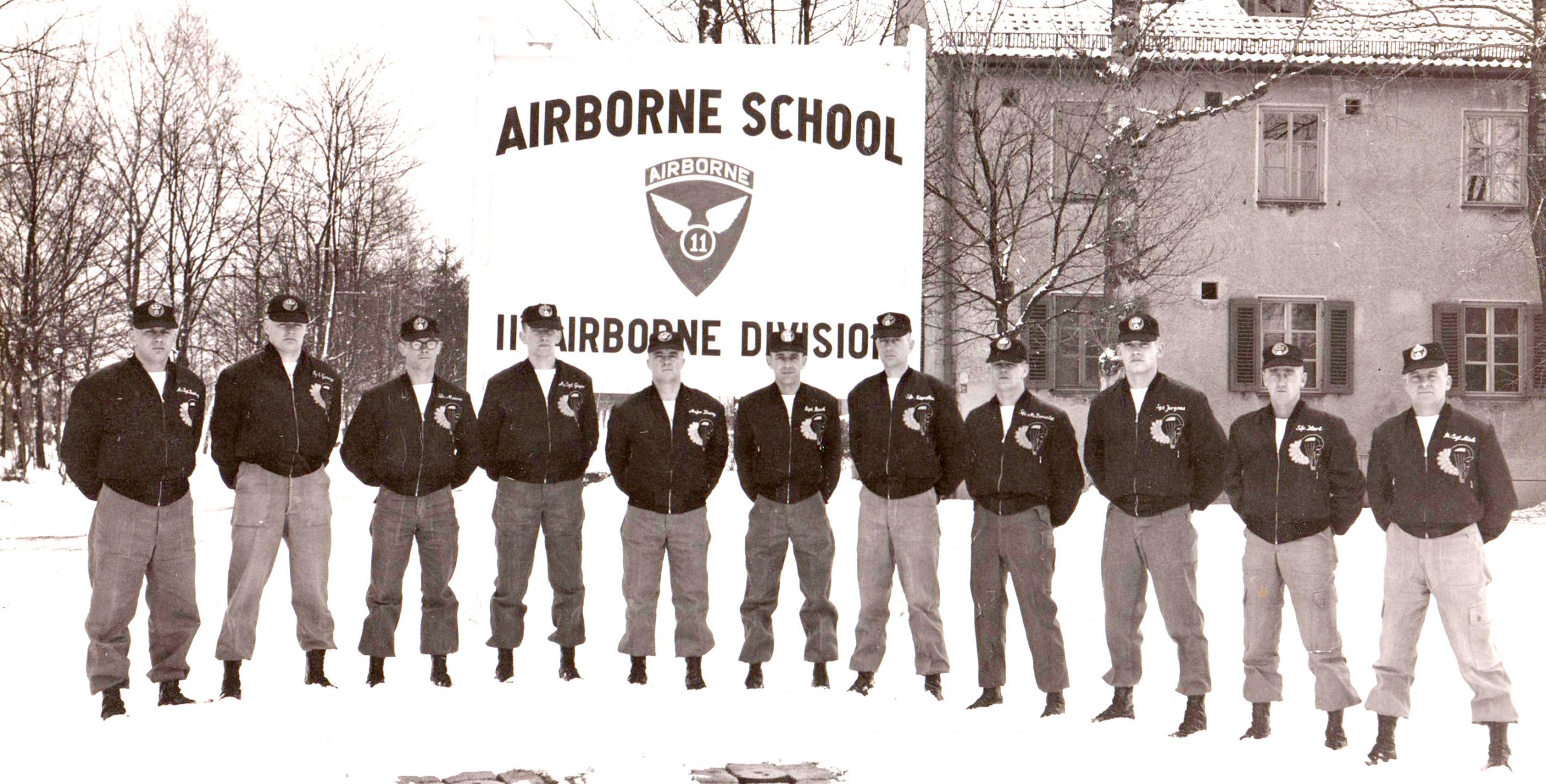 The majority of the Association’s records have been kept by Leo Kocher. By his records there have been over 10,000 members of the Association who have died since he started keeping these records. Each honored member has been recognized in an issue of the Voice of the Angels. We still have over 750 dues-paying members on our active rosters and invite any past or present Angels to join us.

The 11th Airborne Division Association built a monument to the Division, designed and sculpted by world-famous artist and Association member William “Bill” Porteous (HQ2-511, 1942-1945). Bill’s breath-taking statue was placed at Soldier Field in Fort Benning GA on October 12, 1989 at a cost of almost $185,000.00 This was totally paid for by the Association membership and friends. The area where it was placed was an active part of the Post at that time.

Over the years this area was to be designated as a housing area for families stationed at Benning and living on the Post. We were asked to regift the monument to the Army again and have it moved, again at our expense.

Everyone joined together and the Association was again able to get donations of $62,500 00 to cover the movement of the monument to the new location. The new location is on the Airborne Walk directly in front of the Headquarters of 507th PIR who oversees the Jump School training. The first thing and the last thing a new parachutist coming to Fort Benning for training will see is our beloved monument.

The 11th Airborne Division Association has remained active over these years, from 1968 to today. We have held a Reunion every 2 years since the inception all across this great nation that we have served and sacrificed for.

We also have a Ladies Auxiliary called the Angelettes which is a major part of the unit. Without the help of our Angelettes, we would be a lot less than a total Association.

We would like to welcome the new members of the recently-activated Arctic 11th Airborne Division. The information you will need to join us and become a member of the Association is included in this web page, but please be patient. We are currently in the middle of rebuilding our association website and membership information will be coming soon.

THE PURPOSE OF THE 11TH AIRBORNE DIVISION ASSOCIATION IS TO:

DOWN FROM HEAVEN COMES ELEVEN!

I hope everyone had a great Thanksgiving with your loved ones! Photo is of Angels and their Angelettes during a dinner at Camp Mackall, North Carolina in 1943, likely Service Company, 511th Parachute Infantry Regiment, 11th Airborne Division.-JCH ... See MoreSee Less

A TALE OF TWO THANKSGIVINGS:At 0700 on Thursday, November 23, 1944, the young Paratroopers of LTC Orin D. "Hard Rock" Haugen's 511th Parachute Infantry Regiment ate a Thanksgiving BREAKFAST of cold turkey, fruit salad and powdered potatoes.The 511th PIR's Angels were heading into the cloud-covered mountains of Leyte to face the enemy for the first time. Their families were thousands of miles away and as they ate a dreary monsoon rain drenched them and soaked their mess kits. My grandfather 1LT Andrew Carrico of Company D, 511th PIR, 11th Airborne Division remembered that those who did not eat fast enough ended up with mess kits full of “Thanksgiving soup”.The 511th PIR led the 11th Airborne Division's push across the waistline of Leyte where the Angels did what other division's considered impossible by going up and over the heights, breaking Japan's main supply line on the island in the process. That Thanksgiving meal would be the last "real" meal many of the young Angels would eat until Christmas, one month later. Fast forward 78 years to our modern warriors, the Arctic Angels of today's 11th Airborne Division who make us proud and proudly wear the Angel shoulder patch. They are the recipients of a long heritage of Angels who have served their nation, many of whom also endured holidays away from home. As the 11th Airborne Division Association - "Angels" we thank them and want every Artic Angel to know that we support and stand with them. It makes me think of the words of Secretary of War Henry Stimson who just after Thanksgiving of 1943 wrote Division Commander MG Joseph M. Swing, "I know that the 11th Airborne Division will render outstanding service to our country."Down From Heaven Comes Eleven!Happy Thanksgiving, everyone. My best to you and yours. -JCH#11thairbornedivision #11thairborne #511pir #wwii #jber #wainwright #usarmy #downfromheaven ... See MoreSee Less

With heavy hearts we announce the passing of Mortarman, SSG Stanley Young of HQ Co, 1st BN, 511th PIR. SSG Stanley served with the 11th Airborne Division during World War II and was a proud, lean Paratrooper who considered it an honor to serve his country. Stanley was the last known living 11th Airborne raider to participate in the Division's Los Baños internment camp operation to rescue of over 2,100 men, women and children from behind enemy lines. He was also the last living WWII-era 1/511 PIR Paratrooper. Stan was born February 26, 1923 in Oswego to Dwight and Esther (Sprague) Young. He married Lydia Foss on December 5, 1970 and the spent the next 51 years together until her passing on April 1, 2022.In 1942 he received his draft orders and reported to the Army to serve in WWII. He chose the Airborne and was sent to join the 511th Parachute Infantry Regiment at Camp Toccoa, Georgia in early 1943 under the legendary LTC Orin D. "Hard Rock" Haugen who frequently led the Paratroopers' runs up Mount Currahee.Stanley told me of watching Haugen lead the runs, "I was a track athlete. I said, ‘If that old S.O.B. can do it, I can!’”SSG Young first saw combat on Leyte in November and December of 1943 before parachuting onto Tagaytay Ridge just south of Manila on February 3, 1945. During the two campaigns he received two Purple Hearts and a Bronze Star.As part of the 1st BN, 511th PIR, Stanley took part in the 11th Airborne Division's famous raid on the Los Baños internment camp and helped liberate over 2,100 men, women and children from behind enemy lines. GEN Colin Powell said about the Raid: “I doubt that any airborne unit in the world will ever be able to rival the Los Baños prison raid. It is the textbook airborne operation for all ages and all armies.”Stan was many things in his life, a radio broadcaster, a cook, a donut maker, and restaurant owner, but first and foremost he was a carpenter. For most of his life he owned and operated Stan Young and Sons Contracting. His handy work can be seen all over the Oswego and Mena areas including the Oswego Library and Township buildings. He was also given a lifetime membership award from the Oswego Heritage Association for his work on the restoration of the Little White School. His children and grandchildren are proud owners of many beautiful pieces of furniture that he made over the years. A true craftsman he was.He and Lydia owned Scotty's Restaurant in Oswego for many years until 1986 when they moved to Mena, Arkansas to retire. Stan could always be seen at the restaurant making donuts at 4 a.m. or telling or listening to a story at the "farmers table." No one loved a story more than him.Stan is survived by his children Glenn (Sandy) Young of Oswego, IL, Anita (Randy) Gilmour of Cookeville, TN, Don (Sue) Young of Weaverville, NC, Herb (Theresa)Young of Mena, AR, Marie(Pat) McNelis of Morris, IL, Tim (Patty) Young of Overland Park, KS, and Darren (Leslie) Young of Sandwich, IL. A friend and caregiver Joyce Dean of Mena. Many grandchildren, great-grandchildren and nieces and nephews.He was preceded in death by his wife Lydia, two brothers John and Richard Young and sister Margaret Waterstreet.Stan was a truly amazing man who lived a full and remarkable life. He was always a delight to chat with and was a proud Angel. He will be missed by all who knew him. -JCH#11thairbornedivision #11thairborne #511pir #wwii #airborne ... See MoreSee Less