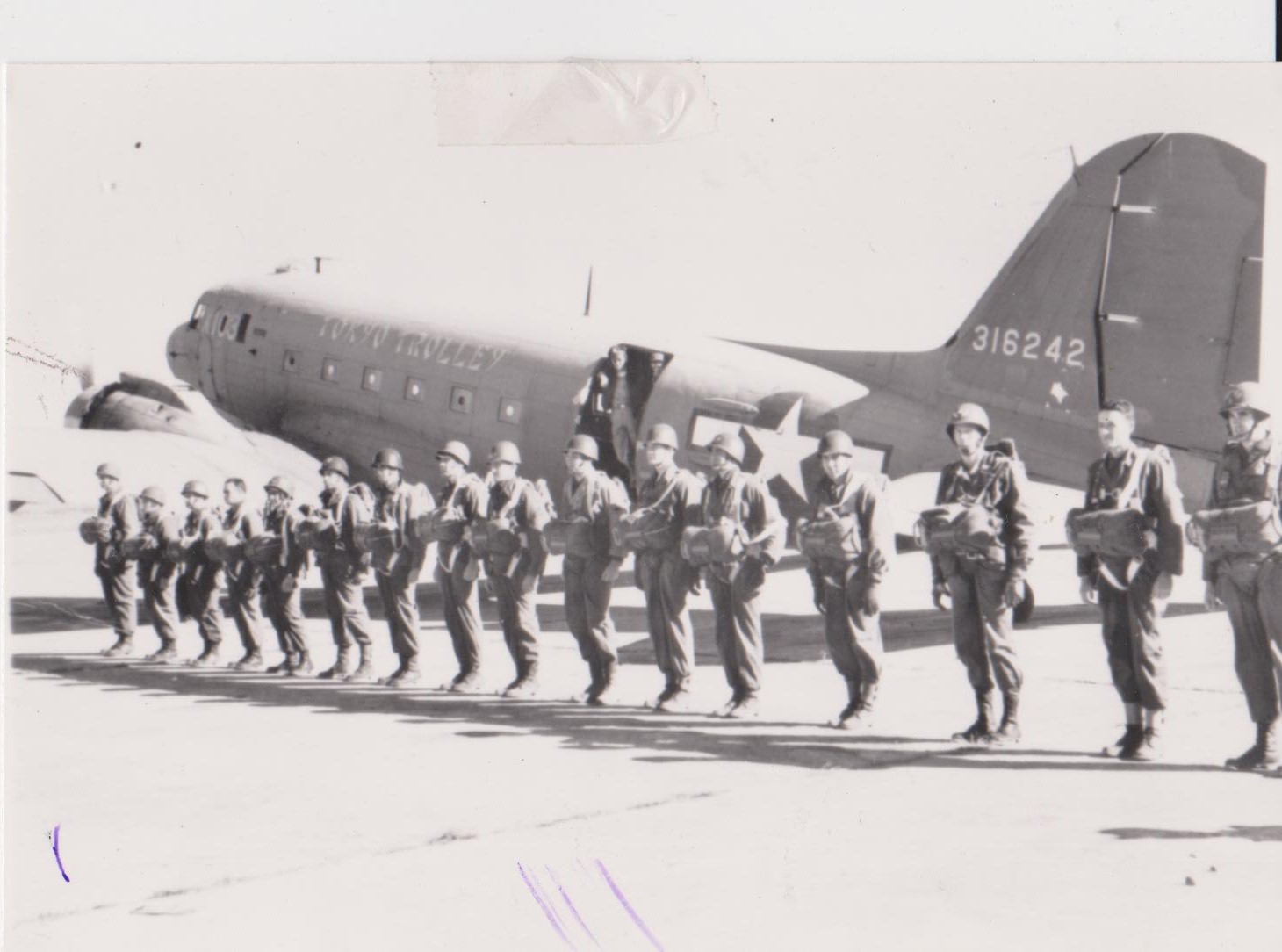 History of the 11th Airborne Division 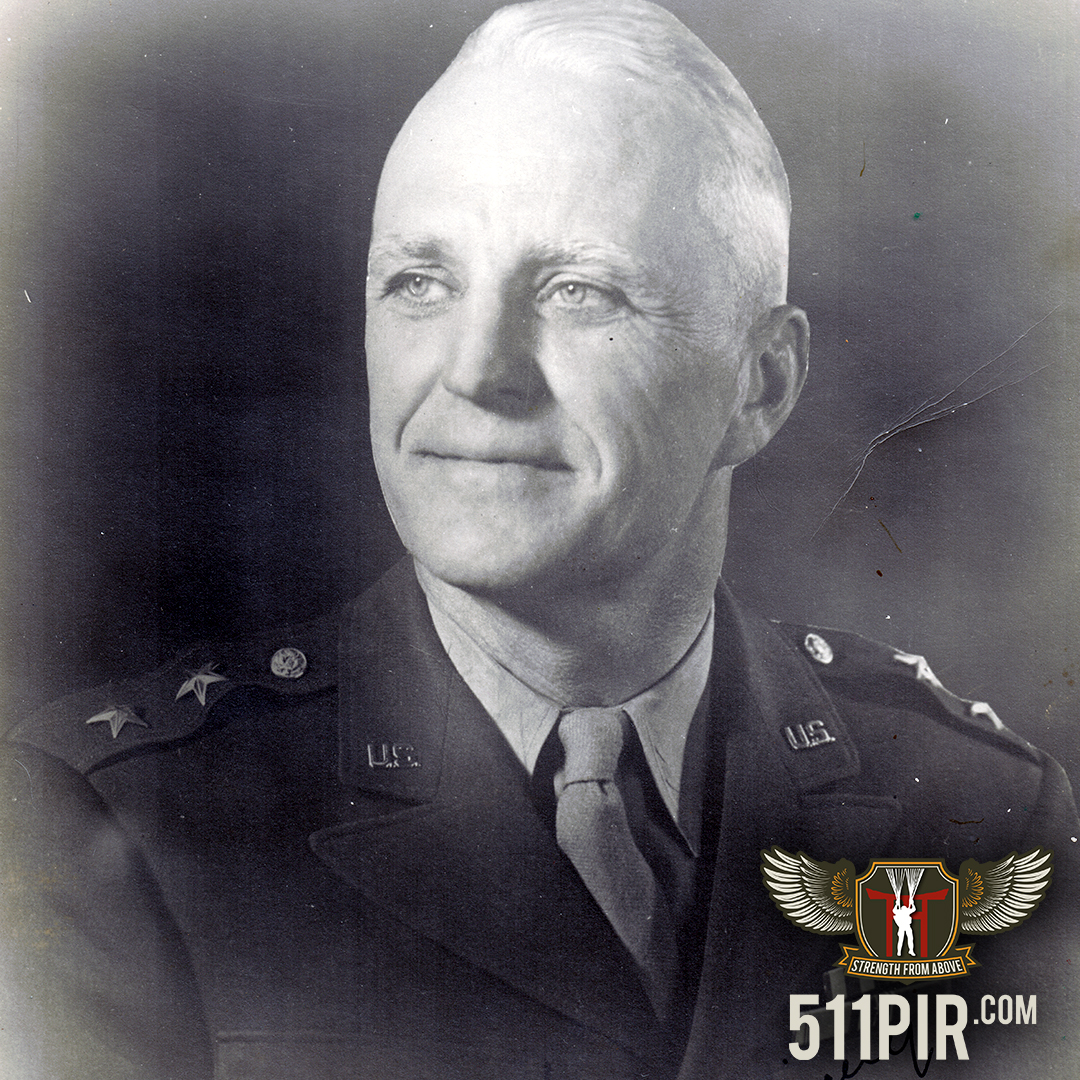 With the 82nd and 101st ABDs already established, on November 24, 1942 the War Department authorized the creation of a third airborne division to be numbered the 11th under forty-seven-year-old then-Brig. Gen. Joseph May Swing. Hailing from Jersey City, the Hollywood-looking Swing graduated from the United States Military Academy in 1915, “the class the stars fell on”, alongside his roommate and football teammate Dwight Eisenhower (Omar Bradley also played with them under head coach Charles Dudley Daly).

Swing served as a 2nd Lieutenant under Gen. “Black Jack” Pershing in Mexico during the “Punitive Expedition” against Pancho Villa in the 4th Field Artillery. When America entered World War I, he served in France with the 8th Field Artillery under Gen. Payton C. March before returning stateside to graduate with honors from Fort Hood’s field artillery school in 1926. Swing taught at Hood until 1931 when he entered Washington’s Army War College until 1935 then bounced between units from 1935-1942 before he was assigned command of the 82nd Infantry Division’s (later Airborne) artillery where he helped his old teammate Brig. Gen. Omar Bradley organize the division’s units. Then, given his penchant for daring leadership, Swing was given command of the new 11th Airborne at Camp Mackall in November of 1942 and promoted to Major General. 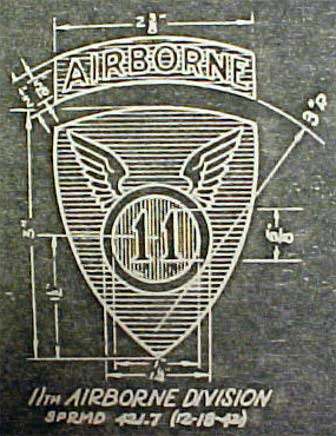 During a meeting in Washington, D.C., Swing presented his idea for the new division’s shoulder patch, a blue shield with white wings crested around a red circle and the number 11, to Col. Francis W. Farrell, his Chief of Staff, and BG Albert Pierson, his assistant division commander. Both enthusiastically approved and the 11th Airborne’s iconic “Angel” emblem was created.

What Colonel Orin D. “Hard Rock” Haugen’s troopers in the 511th PIR called the symbol, however, is unprintable.

Unlike many other airborne “brass”, the piercingly blue-eyed Swing elected to complete all five of his training jumps (Gens. Matthew Ridgeway and Maxwell Taylor only completed one or two before entering combat). In another change from existing airborne formats, Swing’s 11th ABD reversed the ratio of glider-to-parachute regiments with two of the former and only one of the latter, the 511th PIR.

With twenty-seven years of military service, the prematurely grey-haired Swing set out to organize the 11th Airborne into America’s finest fighting unit. Since Swing believed the maxim, “Give a man a job and let him do it”, he kept his officers busy prepping the area.

As men began arriving in February of 1943, Swing’s staff organized Basic Training for those fresh from civilian life. The recruits were met at the train station and trucked to camp for classification. Volunteers for parachute duty were assigned to parachute units, including the field artillery, medical, signals, etc., while all others were sent to the gliders. More than one set of blurry eyes shot open when the cadre explained they were headed for an airborne unit. This led to a central distinction between the parachute troops and glider soldiers. The first were hand-picked volunteers while the second was a conglomeration of recruits. Both groups cursed the desk jockeys who chose this miserable unfinished camp for their assignment and many later said they would rather be in combat than at Mackall.

The 11th Airborne’s T/O came to include:

In 1949 the 11th AB was recalled to the United States, where it became a training formation. One parachute infantry regiment (the 187th) was detached for service in the Korean War, but on 30 June 1958 the division was inactivated.

The division was briefly reactivated on 1 February 1963 as the 11th Air Assault Division (Test) to explore the theory and practicality of helicopter assault tactics, and was inactivated on 29 June 1965. The division’s personnel and equipment were transferred to the newly raised 1st Cavalry Division (Airmobile). 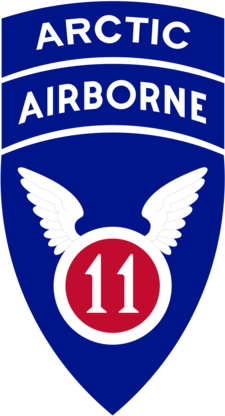 On June 6, 2022, the 11th Airborne Division’s 1st Brigade was re-activated at Fort Wainwright and the division’s 2nd Brigade at Fort Richardson in separate ceremonies.

More division history will be added soon! In the meantime, please enjoy the videos below provided by author and historian Jeremy C. Holm on the 11th Airborne in World War II:

We are a 501(c)(19) which honors 11th Airborne Division Angels / veterans and their loved ones.

The life of an author, even one who specializes in the history of the 11th Airborne Division! ... See MoreSee Less

When this happens, it's usually because the owner only shared it with a small group of people, changed who can see it or it's been deleted.
View on Facebook
· Share

11th Airborne Division Association - "Angels", Let us all salute Stanley E. Hill (July 11, 1930 — December 18, 2022) who has made the final jump MOUNT PLEASANT - Stanley E. Hill, age 92, of Mount Pleasant, died Sunday, December 18, 2022, at Park Place Elder Living.Stan was born July 11, 1930, in rural Trenton, the son of John and Bertha (Christner) Hill. He attended the one room school house at White Oak through the eighth grade. He received his GED at Ft. Leonard Wood Armed Forces Institute. In 1950, Stan enlisted in the United States Army 11th Airborne Division for three years. On December 27, 1950, Stan married Norma Weigert, the couple had six children, and later divorced. He later married Tina Smith on July 18, 1987.Stan enlisted in the US Army Reserves Co B, 495th Engineer Battalion in 1955, and retired as a Major in 1990. He worked full time for the US Army Reserves as a civil service technician from 1982 until he retired in 1990.Stan was very active in the Mount Pleasant community, holding several city positions, as well as serving on the volunteer fire department and city council. In 1954, Stan became an officer with Mount Pleasant Police Department. After four years, he was called to work at the Post Office until 1970. Stan was co-chair to create the Avenue of Flags in 1972. He was the first director of the Public Works Department in 1974, holding the position until 1982. Stan was appointed the mayor of Mount Pleasant from 1993 – 1999. He helped to establish the Henry County Veterans Memorial, which was dedicated in 1994. The Henry County Pioneer Cemetery was very important to Stan, he was a chairperson on their committee for 15 years.Stan was a member of American Legion Post 58 for 66 years and a member of the Faith Lutheran Church since 1964. In his spare time, he played guitar and sang with the Troubadours. Baseball was a passion of Stan’s, he served on the Mount Pleasant Little League Association for 23 years, helping to create the complex we see today.Stan is survived by his wife Tina; six children, Beverly (Dave) Lundgren of New London, Pamela Parcel of Mount Pleasant, Tom (Sue) Hill of Iowa City, Gerald Hill of Iowa City, Jim (Beth) Hill of Iowa City, David (Susan) Hill of Omaha, NE; three stepchildren Kevin (Kim) Smith of Earlville, John (Ann) Smith of Dubuque, Kristina (Dan) Roth of Galena, IL; 11 grandchildren, 8 step grandchildren, 8 great grandchildren, 9 step great grandchildren, 2 great great granddaughters; and sister Melva Sammons of Mount Pleasant.He was preceded in death by his parents; grandson Clint Taylor; step grandson Chad Roth; son-in-law Reggie Parcel; 8 siblings, Lester Hill, Mina Crile, Leola Whitney, Carl Hill, Max Hill, Jay Hill, Kenneth Hill, and Florence Wesley. ... See MoreSee Less